This is Where it Ends Baby !!

High octane couple Russell Brand and Katy Perry finally called it off. Personally I am not surprised but for many of you who are surprised by this news need to know that for all this while Russell was in the process of recovery from his addictive state, it was all falling heavily on Katy the one person in his “life”. Thereafter, before she could do anything about it, the emotional stress lead to a negative chain reaction. Slowly cracks in the relationship started appearing one after the other which was affecting the non-personal areas of the couple. Well, no wonder they didn’t last. What kind of a persona can live up to that? 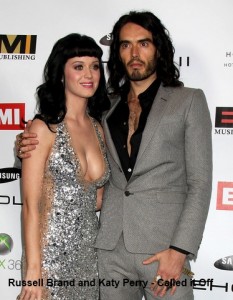 Russell Brand and Katy Perry Called It Off

What is very heart-touching is that theirs was a marriage which happened as per traditional Hindu ceremony, at a place near to “Ranthambhore tiger sanctuary” in Rajasthan western India, the same location where Brand proposed Katy. Now, as per popular opinion getting married in a very traditional and anti-divorce country like India should have given the couple a better “marriage mileage” at least a lot more than other Hollywood celebrities.

On the contrary for Russell it was pure psychology that rode above cultural and ritualistic sentiments, no wonder Brand succumbed to the ways of the heart which he did what had to be done. So Brand filed for divorce from Katy in Los Angeles, citing irreconcilable differences.

As for Katy her religious roots and cultural sentiments did matter, at least to the extent it did not allow her to initiate the divorce proceedings, due to her evangelical Christian background and her family’s belief that divorce is wrong, so our man Russell rose to the occasion and detonated the time bomb called divorce .

Detonation is a triggered event so what are those trigger points which can blow up a marriage is what evolutionary psychologist and pundits of “Darwin theory” are still trying to figure out.

“Divorce trigger point management” or in short DTPM is what Modern Society should be learning and improving upon because in human couples separation of the pair is true but is not normally desired so it is not valid. Therefore it needs to be legally sanctioned, but in animals it is both true and valid since it is sanctioned by the “laws of natural selection”.

All I can say is that I wish Charles Darwin was alive today and guess where his office would be….of course it would be in the Divorce Capital of the world …still guessing ..it is Hollywood of course!