I once dated a woman who found it odd that younger men were unwilling to date her and consider her as a long term dating partner or marriage. This came as a surprise to me since I always understood this rule to be of general acceptance ie. older men are more likely to date younger women than vice versa. However, it begs the question as to why this is the case and are there changing trends? 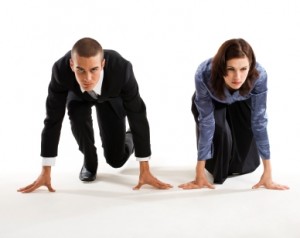 There are multitude of reasons why one gender in general tend to swing the power in their favor when it comes to dating and the marriage game. This perhaps may have to do with the evolution of men and women over time where they needed to co-exist together for survival and procreation. Men simply through their physique have extraordinary powers of strengths and agility and this will not change with time. One has to observe the Olympics to see the differential in times for speed, agility and strengths in all sports activities when comparing the two genders. This gift made men the aggressors of their own race and they were primarily hunters and protectors of their society. It seemed befitting that in the early years of man’s evolution the women would play a vital and integral part to the society by cooking, bearing children and maintaining a home.

This was the ‘organic’ growth of mankind where very few questions were raised towards the gender differences and equality did not set in until a more ‘civilized’ race was born. Although the strengths of women were well understood in society but with the advent of the industrial era skilled workers in the form of men and women changed and even created controversy over the traditional roles of women. Rightly so, women wanted equal rights in certain areas such as pay for the same job functions as men. Another apparent change that was happening due to the working women were their roles at home. Many women at that time courageously worked outside for a living as well as diligently attending to the needs of the home. This may have sparked the thinking behind many of the women’s movements in the last century.

Although one can see the changes in the gender roles both at home and at work, this was not the catalyst for the movements. It was a movement against the male dominated society where they exercised old rules based on tradition and not adapting fast enough to keep up with the changing times. This may be partly due to the ignorance of many or the desire to change or a fear of those changes. However, one cannot look at the macroscopic scale of the changes since there were perfectly contented couples and families that lived a harmonious life together. This clearly shows that the movements are always a result of a few who feel that many are ‘suppressed’ and need waking up.

Here lies another important question, “if a man and a woman are happy and living their lives in a contented manner, does anyone have a right to come into their lives and say it could be any different or better”. Who is to say that a native South American villager living deep in the hearts of the Amazon jungle will be enthralled with receiving an iPod. The point is, the constant outside influence by marketeers, sales people, bombastic tv commercials and the internet are all influencing us in many ways than one. It is up to the individual on how to assimilate this information and use it effectively and most importantly correctly and apply it to their own lives. Intelligent people will take all the information around them with a pinch of salt but keep their focus on the important things in life such as the family, future health and prospects etc.

This entry was posted on Sunday, April 22nd, 2012 at 9:27 pm and is filed under Dating Help for All, Dating and Relationship Advice. You can follow any responses to this entry through the RSS 2.0 feed. You can leave a response, or trackback from your own site.