Angelina Jolie and Brad Pitt…Find Perfect Match in Their Life

The hottest couple right now in Hollywood Angelina Jolie and Brad Pitt enjoys their love life and parenthood. Just like the variety found in a wardrobe couples also have different properties not only in United States but also in other countries around the world such as England, Italy and France. Need to call them to get the accurate stats, just kidding. 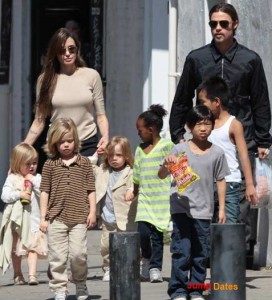 Both of them are the successful Hollywood stars and don’t require any introduction even in many parts of the world, it’s just that their name is enough as they carry the charisma wherever they go, Angelina Jolie. They met on the set of Mr. and Mrs. Smith this was time when Brad Pitt was in the headline news for ending his 5 year old commitment with Jennifer Aniston. Soon after the divorce with Jennifer Aniston in April 2005 the love of Brad Pitt and Angelina Jolie was very much a public affair and was spotted enjoying their Vacation at the beach in Kenya. This was not the only relationship that failed for Brad Pitt as he dated his co-star in the movie Seven for three years. Angeline Jolie was also in search of her true love before this and she too has a history of failing relationships. She was involved in a serious relationship with her boyfriend of two years and when they brokeup it ignited her passion again for her acting career. Jolie was involved with her co-actors as this would lead to romance, but she got married to actor Billy Bob Thornton on 5th May 2000. But three years down the line they found that they were not made for each other and their divorce took place on May 2003.

After facing some storms in her previous commitment the couple has decided to live together to see whether their relationship is going to work? Their early days were difficult as Angelina was blamed of being a catalyst between Brad and Jennifer which led to the divorce between Brad and Jenifer. This allegation was condemned by Brad and Jolie. Jolie said that she can not do such thing and could not see herself in the morning. Probably as her mother was cheated by her father when she was only one years old.

It seems to be that early parenting was the key for lasting relationships, which is certainly now in their love life. When they started living together they were already a parent for Maddox. Angelina adopted Maddox from Cambodia, while shooting for “Tomb Raider” and when she committed to Billy Bob Thronton, they adopted a daughter Zahara from Addis Ababa, Ethiopia. But going for their biological child gave a lot to talk about in their relationship and was visible with freaky articles putting question marks on their relationship. To shut all these media hype Jolie gave birth to a daughter Shiloh Nouvel. In 2007 they adopted a son Pax and soon Jolie gave good news at Cannes festival that she is expecting twins.

Angelina Jolie and Brad Pitt sets the perfect example of couples around the world that it’s not only the commitment that keeps you together but it’s the love that works as cohesion. Both Angelina and Brad were unfortunate in their early relationship, but now with seven years of long relationship it’s like they finally found the “Love of their life”. The big question is when they are going to marry? Well this also seems to be on the cards as many celebrity websites published that they are going to marry this summer in France.