Morocco is located in Northern Africa and has an indigenous population called the Berbers who are practicing Muslims and retain much of their old traditional values. Although the major cities such as Marrakech have taken on some of the typical fashionable views of the West when it comes to dating, the rural areas of Morocco still have a strong tradition when it comes to dating and marriage. However, those times are also changing due to the access of the internet which allows more singles the freedom of choice and making decision according to their own personal tastes. 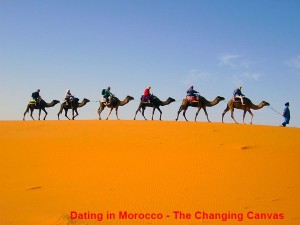 The introduction of these new fashionable ideas from different parts of the world also brings with it the conflicting traditional views that are instilled in the cultural values of the society. Some of the peers have been outspoken in this area and they have always used their faith in the islamic religion as an example of the proper way of life. This can also introduce conflicting views especially amongst the young who have a different eye lens to the rest of the world than their parents.

As mentioned previously the rural areas of Morocco still retains its strong culture not so much due to the lack of knowing because practically everyone can access the internet but more so because the practicing values of western style is not that evident on the streets. The people are modestly dressed and older members of the community gather around the coffee shops discussing philosophy and chatting about the changing values of their society. The younger population are taught to go to school and make a better living for themselves but retaining much of the faith that has been passed through the generations.

Some also think that as time progresses all areas of the country will be touched by the ‘modern way of life’. Still, if you enter the city such as Marrakech, you cannot help but admire it’s great historical value and then the area which has been entirely customized for tourists. Even though the society appears to be liberal when it comes to dating and marriage ie. the many Moroccan girls in the cities are usually dressed in tight proactive jeans and tops, however, the actual ideas and values of marriage are well established in their thinking. They are almost seemingly aware of the frivolous fun that can be had from the nightlife of dance, music and song but understand the nature of marriage. Marriage to these city goers seem to come from girls who are not shy to flash their wares during courtship and dating but only with the desired purpose of marriage. Once married their lives take on a whole new meaning and the traditional views of marriage that has been passed from their parents start to kick-in.

One could argue that this kind of dating is a charade to the real thing which is ultimately marriage and many would say that this would be the wrong way to embark on a lifelong decision. However, the point is that women in Morocco are developed sufficiently to understand men’s needs from both the wife point of view but also the important aspects of being a beautiful friend and lover. Hence Moroccon women have been spoken with ill-fashion by other women from the Middle East. You often hear of sayings ‘They always take our men’, ‘what is it that they have and we don’t’.

Equally men from the Middle East and other parts of the word have found Moroccon women to be some of the best looking in the world. However, I tend to think that this is due to the importance they place on their looks in finding the best potential mate for marriage. As a result many will wear curve fitting jeans and lace themselves with make-up to make any men oagle with delight. The same analogy applies in the animal kingdom where animals will mate with the best of the breed and girls in Morocco will do their best to find the best mate. However, this very notion is at odds with the religion of the country where women are supposed to dress modestly and keep gazing eyes away from themselves.

Dating in Morocco is a very different affair to the way we date here in the West. Although many Western men generally lean towards women from say Ukraine, Philippines, Vietnam they have not been exposed to women from other cultures such as Morocco. There have been many cases where British men have gone to Morocco to date and find a marriage partner and are very content with this setup.