The different meanings of the word selfish explained through personality traits

We often use this word to justify someone’s character due to their behavior. However, the word has such a broad connotation and meaning that to label a person entirely as being selfish would not be justified or even qualified. To live in a society with that personality alone would be near impossible.. we would find ourselves deeply isolated from the real world. 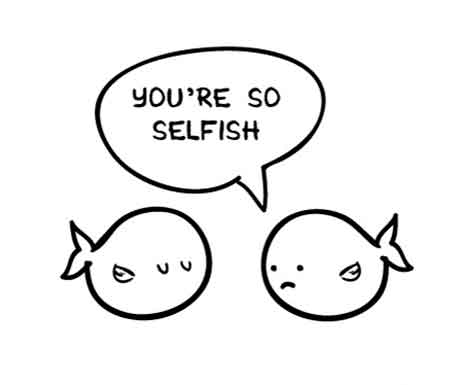 So why do we consider other people are selfish?
Maybe when you have a need and the other person does not fulfill it, you immediately label the person as selfish. It could be that you are selfish to think so and expect the other person to happily go about doing what you ask. The point is, when you label someone ‘selfish’, try to put it into perspective and ask why they are being selfish.

Selfish is sometimes associated with arrogance.
We know that arrogant people (who think highly of themselves) are usually always making references to ‘me’ or ‘I’ and does not really pay attention to other folks. We may find these people selfish since their appearance and behavior is always pointing towards them. There are subtle differences here when we associate arrogance to folks who are very talkative and those who are not. You may make the mistake of a quiet person as less arrogant than the talkative part but this may not be true. The quiet person may be equally arrogant in their nature by not associating with other people or deliberately trying to keep away from interactions with other people. Their world will become topsy turvy if they don’t have control over their domain. As a result they can also appear selfish.

Assertiveness & selfishness.
Sometimes assertiveness is construed as selfish but the difference is that the assertive person is empathetic whereas the selfish person is not. A selfish person will normally never undertake a task that you ask them to do for whatever reasons whereas an assertive person will do the task whenever they can.
An assertive person does not have to forceful as the Oxford Dictionaries describe it, a better description is found in the Merriam-Webster dictionary.
Oxford Dictionaries:
confident and forceful behavior
Merriam-Webster:
confident in behavior or style

Oddly enough the first is from the UK and the second from here in the US. This can explain some of the general stereotypical personality traits between these two nations ie. one taking a negative stance on responses to ‘no’, whereas the other nation encourages this kind of behavior. We have heard the negativity of being two faced, maybe it is a result of how we assert ourselves. Anyways, this is probably another discussion of topic for another time.

One of the biggest things we can learn about ourselves is the ability to take control of how we react to an unpleasant situation from say a selfish person. We may feel hurt but out of that comes resentment and to alleviate our stress we start blaming other people for the way we feel. The best course of action is simply to appreciate that these people exist and they may offend you one way or another but make it a point that they may be having a bad day. Also reflect afterwards if the negative reaction was caused by you.