Who’s got the Better IQ for Online Dating Sites…Single Men or Women?

IQ, yes you read it right but not sure got what I am trying to say… I mean to say IQ – emotional quotient. Trying your luck on online dating sites to find the perfect date can be frustrating for those who don’t follow the basics of online dating.

JumpTrends – The dating trend and infographics section on Jumpdates found that female online singles took the first step and become quickly active on different part of the online dating sites like forum and blog to effectively advertise their profile.

Women want men with sex in their mind and love in their heart but, men want the opposite so says Frances Cohen Praver, Ph.D. - a clinical psychologist and relational psychoanalyst and author. Women would stay a bit longer as compared to males who just don’t hesitate in switching online dating sites. While trying your luck on free dating sites be strong and have plenty of IQ.

Smartphones has changed the way we do search for online singles seeking potential dates on free online dating websites. Now more and more singles are looking for their date while on the go. JumpTrends - Research and Demographic from Jumpdates.com has sampled a year’s data to see how much impact smartphones has made with users. 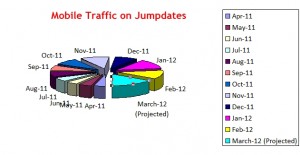 Mobile traffic on Jumpdates since April, 2011 has been increasing steadily at a rate of 10% per year. However December, 2011 saw a dip of 20% in mobile traffic that could explain that singles were enjoying the festive season and keeping away from free online dating websites.

Jumpdates.com has launched a free mobile dating app in the month of December, 2011 which became very popular amongst online singles. The mobile traffic during the first two months i.e. in January, 2012 and February, 2012 has seen a rise of 30% and 26% respectively as compared to December, 2011. But, by March, 2012 has seen the strongest growth happening for online singles as it shows a whopping 20% growth over the previous month of February, 2012. This is 400% increase in overall mobile traffic since April 2011 on free online dating websites, Jumpdates.

Giving an early glimpse into the year 2012 we expect the number of visits from computer users to the website will be out-numbered by mobile visits and in some cases like PlentyofFish.com it has already happened.

There are more real dates on weekend than on weekdays as singles get wind down to relax and spend more time to prepare for the date to get everything right. JumpTrends – Research and Demographic from Jumpdates.com found real traffic trends on free internet dating sites. 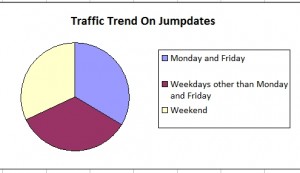 These real dates on weekends, unfortunately end up in break ups. This show a good impact on Jumpdates member login and traffic trends during the weekdays. Monday especially looks to be the top day for online singles to search for dating partners on free internet dating sites.

As the stat speaks, Monday shows a 7% increase in overall traffic compared to other days of the week. This trend continues for the entire period which shows that online singles are trying hard to locate dating partners on free internet dating sites. Come weekend, when online singles meet other singles and spend time on their real date the overall traffic becomes flat and at times takes a dip. Weekend on free internet dating sites also is less busy with online singles do a lot of window shopping and avoid the singles connection. The online behavior seems to follow the traditional behavior of dating which has remained unchanged for many years.

Valentine’s Day is a day of love when you express your love to someone special in your life, cherish the moment and make future plans to cherish your long term relationship. Unfortunately, for many this day can also turn out to be when couples break up. 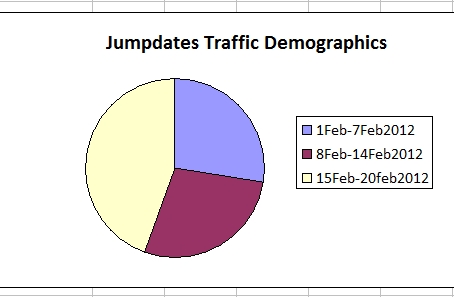 JumpTrends – Research and Demographic from Jumpdates did a research on what impact these break ups have on traffic trends on free online dating sites, Jumpdates.com. JumpTrends found that online singles start looking for their Valentine’s Day on free online dating sites from the 1st of February as the visits to the Jumpdates.com has gone up by as much as 15% for the first week and then continues to be the same in the 2nd week of February 2012. The traffic on free online dating sites were at its normal flow during 12th Feb. to 15th Feb. 2012 which shows that singles were enjoying their time with their dating partner. And very near to the dates on 14th Feb 2012, traffic flows were slightly below average.

Traffic flow touched its new height as it went up by 18% after 16th Feb 2012 which indicates that young singles faced break ups and were searching for dating partners on free online dating sites. This continues for the entire week following Valentine’s Day.

Be a fan on Facebook to get latest dating trends - http://www.facebook.com/Jumpdates

I was conducting some Google keyword analysis recently and came across what online singles usually type into the search engines when it comes to looking for love online. Apart from the usual brand names that users are familiar with such as match and eharmony, many of our lonely singles are actually searching for free dating sites. It is not surprising when you look at the top searches that they are conducting daily usually point to free online dating websites but with a difference. Most as can be seen in table 1 are looking for the very best dating sites that also happen to be free. 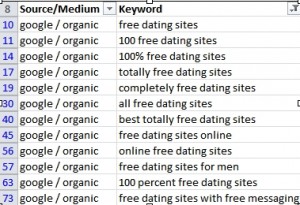 If you look through the list, you will also notice that most users would also go as far as to type ‘absolutely’, ‘top’, ‘free messaging’ etc. into their search for free dating sites. The fact that users are adding these additional descriptors only explains the importance of what they are looking for. The fact that they also rely on Google to return the correct types of dating websites that they are looking for explains their trust and belief in the Google search engine. Fortunately for many, Google does indeed present all these lonely singles with the best search engine results possible.