My recent visit to India has made me think of this title. One of the biggest online travel company Expedia just started their operation in India and goes viral on every Indian TV channels with their TV commercials on prime time. 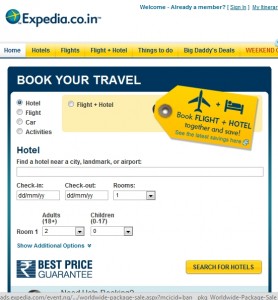 One of their TV commercial grabs my attention where a guy from USA and girl from India sharing their water boat ride and this guy tries to start a conversation with the girl by speaking on different topics. On the other side the girl starts making faces to signal that guy that she is not interested in him. But, this scene suddenly turns in to an interesting affair when guys tells that girl that he has booked his entire travel pack from Expedia and girl also says “So did I”.

This is the perfect example of how online single gets connected when they come to know that they share the slightest of similarity or common interest. This is strongest driving force that is true of most online dating sites and as a result creates millions of relationships.

Tell us your story where you get connected to online single in seconds and share the strong relationships.


Tags: common interest, interesting affair, millions of relationships, online dating sites, Travel Agent can be a Catalyst between Online Singles – This is what they say, TV commercial

Don’t be Swayed By Brand Names, There Is A Lot to Be Said About Free Dating Sites

In the same way when we go to supermarkets to buy groceries, we maybe influenced by familiar names that sit on the top shelves waiting to be picked. It’s almost like they want you to make that connection with the TV commercial the other day and be comforted to know that ‘they are the good ones and the only ones’ and others will not suffice. As a result the less-branded unknown names suffer and you maybe missing out on a good thing. The same analogy can be applied to free dating sites who are itching to vie for your attention but the branded sites almost always dominate the scenes.

Think to yourself how often you have fallen for this stunt but you almost feel helpless because the other dating websites haven’t come up to you and said anything. How can they? Despite the fact that these dating sites don’t have the clout to compete in the same space as the branded sites, there is something that they will never be able to compete with and that is price. After all these websites are absolutely free to use and who doesn’t like that!

In today’s hard times, more people are careful with money, however there is a caveat to all this. During hard times such as now we yearn for consoling by loved ones and we have tendency to group and huddle together. What happens as a result is that both camps actually win the stakes in capturing your attention to their sites. The feeling of needing a companion becomes even greater and those who are foolhardy in the heart will still be drawn by the branded shelves and those foolhardy in the head will still watch their purses and go for the lower shelves.

It is very easy for us to be drawn into one way of thinking, its like we grow up eating the same food and its only after experimenting that we open ourselves to the wider appeals of our tastebuds. The same can be said about branded names and the free dating sites, you will not know unless you make a conscious decision of trying.