The Low Down on Mingle2.com - Free Dating Platform Review

When you first register to the site, it clearly indicates that it only takes 30 seconds to register. This is a myth and in actual fact as one page is presented one after another, I found it took me approximately 5-10 minutes to register to the site. One thing it does ask you for is your mobile cell number. I was at first reluctant to give out this number but I felt that there was no other option and would not be able to join the site. I received three text messages once I submitted my cell number and they were rather vague. In all cases the message read… 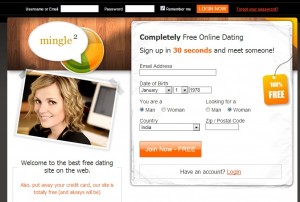 This was confusing to say the least and I was concerned that I was going to get billed. It occurred to me that telcos used to charge whenever a phone call or text message was received. However, I wasn’t sure if this rule still applied or was demolished due to the many outcries of the public. In any case, I was careful not to reply to the message because this could surely appear as a stinker on my AT&T bill. I am guessing that mingle2 relies on some folks to unknowingly reply and dish out some money as a result. What was more intriguing was the final text message which read…

Got a question about anything? Reply now for a real-time answer from an operator!

This entry was posted on Thursday, January 17th, 2013 at 8:42 am and is filed under Dating Site reviews 2013, Online Dating Sites Reviews. You can follow any responses to this entry through the RSS 2.0 feed. You can leave a response, or trackback from your own site.

2 Responses to “The Low Down on Mingle2.com - Free Dating Platform Review”