Ishqiya is about two thieves Khalujaan (Naseeruddin Shah) and Babban (Arshad Warsi) running away with money from their boss. In this situation they feel that the only secure place to hide is their friend’s home, but finds out that he is dead. Krishan (Vidya Balan) playing the role of widow takes not time and gives them a place to hide. Story flows with a lot of convolutions and engage audience until the very last minute. Debutant director Abhishek Chaubey did a fantastic job as director of this movie. 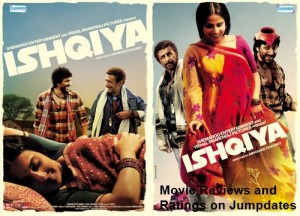 Movie Reviews and Ratings of Ishqiya

Story of the flick starts with Krishna (played by Vidya Balan) convincing her hubby Vidyadhar, who is a local gang-leader to surrender to police. He pretends to agree, but dramatically dies in a gas explosion. Now Krishna is living a life of a widow, then enters in the movie a team of two criminals Iftikhar aka Khalujan (played by Naseeruddin Shah) and Razzak Hussain aka Babban (played by Arshad Warsi). Both of them ditch their job and try to escape from their boss who wants to catch them and bury them alive.

The duo land up in Vidyadhar’s house to seek refuge from there, the boss comes to learn that Vidyadhar is dead, Krishna gives them shelter and starts seducing both of them and pretends to be in love with both of them to achieve her secret goal. Khalujan and Babban also fall to her trap, but don’t express their feelings either to Krishna or each other. The intimate scene between Vidya Balan and Arshad Warsi made a lot of controversies before the release. Krishna proposes both of them to kidnap Kamalkant Kakkar aka KK, partner of Vidyadhar in his illegal job. Story takes an interesting twist and turn when all of them come to know that Vidyadhar is still alive.

Last one hour of the movie is full of drama. Babban and Khalujan were blindfolded by the Vidyadhar’s men and taken to get killed, they manage to escape from there, and this fight sequence is ordinary and reminds us of the 90’s era. Finally, Vidyadhar gets killed and the trio has the last laugh.

Ishqiya is one time watch movie and does not have enough fire power to attract the audience for a second showing. It has an average story and except for some of the scene are very funny and has some vulgar dialogs. Highlight of the movie is Vidya Balan and her abusive dialogs which she does with ease and perfection. Naseeruddin Shah was fantastic as Khalujan and so did Arshan Warsi. Director Abhishek Chaubey did a fantastic job and made a fantastic first movie as debutant. Lyricist Gulzar good song and “Dil to Baccha Hai ji” and “Ibn-E-Batuta” were both chart toppers for months.

Ishqiya scores 6 out of 10 for its dialogs and Vidya Balan’s performance that many leading actress would not think of doing onscreen. Songs written by Gulzar and sung by Rahat Fateh Ali Khan gave it extra mileage.

This entry was posted on Saturday, January 7th, 2012 at 9:33 pm and is filed under Indian Movie Reviews, Romance around the World. You can follow any responses to this entry through the RSS 2.0 feed. You can leave a response, or trackback from your own site.