Once Upon a Time in Mumbaai is a story of an underworld don Sultan Mirza / Haji Mastaan (Ajay Devgan) and the rise of Imran/Dawood (Imran Hashmi). Sultna Mirza is famous don of Mumbai and lives life wanting to rule Mumbai in a clean way as this city has given him shelter. Imran wants to rule the city by any means (hook or by crook), this leads to clashes between the two. Movie has the retro look of the 80’s and has some excellent dialogs which are refreshing to watch and listen. 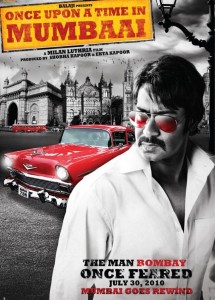 Movie reviews and Ratings of Once Upon A Time in Mumbaai

Commissioner of Police (Randeep Hooda) puts himself in charge to create a don because due to him a Mumbai blast happened when once a gangster Sultan Mirza (played by Ajay Devgan) ruled Mumbai. Sultan was not only a gangster, but also godfather of the poor people, he used to donate half of his earnings to poor people when he was a child and was working in a dock yard. He used to handle his job with discipline and humanity. He believes in his ideology that “when the work can be done with friendship then, why make enemies”. He is fond of the film actress Rehana (played by Kangana Ranaut) and manages to meet her and impress her and they start dating each other and both fall in love.

There is a guy named Shoaib as depicted underworld don Dawood in real life (played by Emraan Hashmi). He is ambitious and an unruly boy from his childhood. Sultan Mirza is powerful and Shoaib also wants to be like him and joins his gang and in the passage of time Shoaib becomes the right hand of Sultan. Shoaib has a girlfriend named Mumtaz (played by Prachi Desai) whom he deeply loves.

Sultan decides to leave all the bad jobs of his past and wants to join politics and gets involved over in Delhi, but here in Mumbai Shaoib is taking care of his empire in his absence. Shoaib enjoys his powers and position and continuous with all of his illegal ways including contract killings, extortion and production of illicit liquor. When Sultan returns to Mumbai and comes to know about Shoaib’s act he asks him to stop all that he is doing which create a rift between them, Now the infuriated Shoaib in is no mood to shut his operation as he wants to be the king on Mumbai underworld and plans to kill Sultan Mirza.

Movie has the complete look of 80’ retro fashion and shot with immense perfection. Ajay Devgan has been shown in larger than life image. Movie has great dialog and every scene of Ajay Devgna was phenomenonal. Imran Hashmi looked very in good in the movie and helping him to shed his serial killer role as in his previous movies.

Movie is shot in the 80’s when Mumbai was called Bombay. It was the time when the underworld drug mafia was ruling the city, no opportunities for the young and crime too its place in the city. Movie has been shot very well and the screenplay of the movie is excellent. Movie connects with the audience and engages them throughout. Both ladies Kangana Ranaut and Prachi Desai gave strong performances. Director Milind Luthria, directed movies like Kachhe Dhage and Taxi No. 9 2 11 and was able to deliver once again on the silver screen.

Once Upon a Time in Mumbai scores 8.5 for its larger than life image of mainly Ajay Devgan with good music and recreating the entire 80’s era and gains an extra half a point extra for its very well written dialogs. This pushes the overall rating to 9 out of 10.

This entry was posted on Tuesday, December 27th, 2011 at 10:24 pm and is filed under Hollywood Movie Reviews, Romance around the World. You can follow any responses to this entry through the RSS 2.0 feed. You can leave a response, or trackback from your own site.