New York based Doctor Manoj Sharma aka Manu (played by R. Madhavan) comes to India looking for an Indian bride. Manu falls in love with Tanu (Kangana Ranaut), but Tanu loves another local guy. Tanu request Manu to reject her and so he does. Movie takes the real romantic turn and becomes a romantic tale of Tanu and Manu. The on screen romance of Madhavan and Kangana Ranaut beautifully directed and equally well acted. “Manu Wed Manu” is a romantic entertainer. 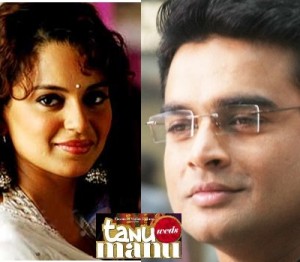 “Tanu weds Manu” on the front seems like an average story, but becomes special from the onset as every area of the movie has been well directed. Manu is a New York based doctor who comes to India looking for a bride. A typical Indian way to find the bride is to look for different girls and then choose the best one you like that fits your requirements. Manu starts looking at the potential bride Tanu and likes her very much. Manu agrees to marry Tanu but Tanu is not happy with this and has been in an affair with a local man. Manu comes to know this and rejects Tanu.

Later they both meet each again in a wedding as Manu comes to learn that Tanu is still single. Tanu ask for Manu’s help to get married with her boyfriend. Somewhere bottom of his heart Manu starts to love Tanu and wants to make her happy. Tanu would be happy if she gets married to her boyfriend and he could not say no to Tanu

This complicated ride becomes the romantic tale as both Manu and Tanu start liking each other but could not share their feeling for each other. Romantic scenes of Tanu and Manu were beautifully picturized as they looked like a perfect couple. Kangana Ranaut has made a special presence on the silver screen in her short career and looked very mature. R. Madhavan gave a towering performance and looked the perfect cast for the role of Manu.

“Tanu Weds Manu” is a romantic movie released after a long time in Bollywood. R.Madhavan has a few romantic hits in South Indian cinema. R. Madhavan did not have any romantic movie after “Rahna Hai Tere Dil Me”. Madhavan has been giving hits like “3 Idiots”, “Rang De Basanti” and Guru. Kangana Ranaut is the pick of cast and fits well in the role of “Tanu”. Kangana Ranaut gave a towering performance and she has matured as an actor since her debut in “Gangster”.

Rating
Movie scores 7 out of 10 for its simple yet entertaining storyline, good music and best performances by all the actors. Story fails to score more as at times it becomes very slow and as an audience you feel like fast forwarding to the main scenes.

This entry was posted on Friday, January 20th, 2012 at 1:05 am and is filed under Romance around the World, Romantic Movie Reviews. You can follow any responses to this entry through the RSS 2.0 feed. You can leave a response, or trackback from your own site.