Silsila is a classical romantic story that made the history with love stories and extramarital relationship which created plenty of controversies. Shekhar (Rishi Kapoor) is a squadron leader in Indian Air Force and in love with Shobha (Jaya Bhaduri). Amit (Amitabh Bachchan) is a romantic poet and loves Chandni (Rekha). Silsila is story of love, scarifies and extra marital affairs and released under Yash Chopra studio who created history for generations to come. 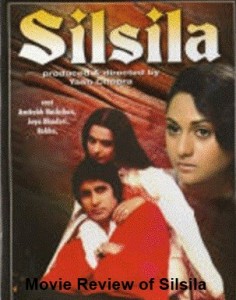 Movie reviews and ratings of Silsila

Amit (played by Amitabh Bachhan) and Shekhar (played by Rishi Kapoor) both are orphaned at a very young ages, they grew up independent as Shekhar being a squadron leader in IAF and Amit being a struggling writer. Shekhar fallas in love with Shobha and wants to marry her, but story takes an unpredictable twist as Shekhar dies in a plane crash leaving behind a pregnant and helpless Shobha. Now Amit takes the responsibility of his friend and gets married to Shobha and tells Chandni to forget him. Heartbroken Chandni believes that this is in their fate and marries her childhood friend Dr. Anand (Sanjeev Kumar). Even if Amit and Chandni have accepted what is written in their destiny, but they still love each other.

Their love turns to be an extra marital affair and Amit happens to meet Chandni and their romance is rekindled once again. This on screen romantic couple was part of the controversies as there were lots of rumors about their love affair of Amitabh Bachchan and Rekha that gave this movie an extra mileage. This affair was never proven true which gives the impression that the controversies were created to get publicity for this movie.

Story take lots of roller coaster ride and have lots of convolutions before reaching to the climax. Story becomes unpredictable as both Chandni and Amit realize that what they are doing and will lead them nowhere and they should stick to their partners which happens to be the happy ending of the movie.

Excellent performance made it a classical romantic movie to watch, Amitabh Bachchan is exceptional and director Yash Chopra proved again why he is the king of Romance in Bollywood. The pace of the movie was perfect and engages the audience during the movie. Jaya Bachchan touched the audience with her sensitive performance that touches everyone’s heart and Rekha looked very gorgeous. She has very short role and one should give full credit to her mature performance. Sanjeev Kumar was in a simple character and justified his role with some grace. Yash Chopra was excellent with his screenplay and cinematography.

Silsila bags 8.5 out of 10. This classical romantic story deserve this and credit to everyone who is part the bigger crew and worked like a team effort rather than an individual’s effort.

This entry was posted on Tuesday, January 10th, 2012 at 1:44 am and is filed under Romance around the World, Romantic Movie Reviews. You can follow any responses to this entry through the RSS 2.0 feed. You can leave a response, or trackback from your own site.

One Response to “A Classic Love Story - Silsila”