“Mere Yaar Ki Shaadi” is a love of Sanjay (Uday Chopara) and a girl Anjali (Tulip Joshi) that are childhood friends. Now they are grown up and Anjali is getting married to a boyfriend Rohit (Jimmy Shergill) but Sanjay loves Anjali and believes that Anjali also loves him. Sanjay joins the wedding arrangement and try all sorts of tricks to avoid Anjali getting married to Rohit. 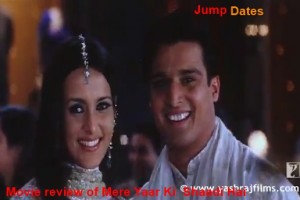 Sanjay (Uday Chopra) and Anjali (Tulip Joshi) are childhood friends and share some of the sweet childhood memories. However, both are grown up and live individual lives. Both has their dating partner and are happy with their relationships. Sanjay come to know that Anjali is getting married and his feeling for Anjali comes alive which he was not able to tell her until now. His goal is to break this relationship and stop Anjali getting married Rohit (Jimmy Shergill).

Sanjay is more of a family member to Anjali’s family as he tries to convince everyone that Rohit is not the right guy for Anjali and tries to brainwash everyone into thinking that she will not be happy after marriage.

Sanjay plays all sorts of tricks with Rohit and somehow manages to defame him, but Rohit comes to know the truth and takes this as a challenge. The special appearance of Shamita Shetty in Bachelor Party with item song “Sharara Sharar” was very hot and she sizzled on the dance floor. Story of “Mere Yaar Ki Shaadi Hai” was able to engage the audience with its good pace and the tussle between Rohit and Sanjay was fun to watch.

Unsuccessful in his trick Sanjay did not manage to break Anjali and Rohit’s relationship and decides to leave, but as all Indian romantic movies have a twist in the tale Anjali feels that she loves Sanjay more than Rohit. Her heart beats for Sanjay. Two friends who spent so much time together and could not share their feelings is hard to understand. This makes the plot of the movie a little weak and not credible. 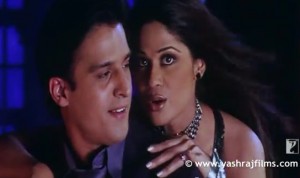 “Mere Yaar ki Shaadi Hai” is another Yash Raj Studio movie which focuses on a love story. Tulip Joshi looked gorgeous in her debut film and looked like a promising star. Bipasha Basu as Sanjay girlfriend looked good but director Sanjay Gadhavi missed the trick in casting her and clearly the talent is wasted. Jimmy Shergill did an average job as Rohit.

“Mere Yaar Ki Shaadi Hai” is an average movie, however this is the first time when Uday Chopra looked good and proved his acting talent. The only actor who gets the mileage from the movie is Uday Chopara. Very few directors get the chance of directing Yash Raj studio movie and Sanjay Gadhvi did not let them. Sanjay Gadhvi did a superb job and was outstanding with screenplay. Music by Pritam is the soul of the movie, but could not save the sinking boat of “Mere Yaar Ki Shaadi Hai”. Romance in the movie is the tradition of Yash Raj Studio from decades and with “Mere Yaar Ki Saadi Hai” audience expected the same intensity that they were used to but feel let down by this move.

Rating
“Mere Yaar ki Shaadi hai” bags 7 out of 10. Movie fails to score more even been with big star casts because of the somewhat artificialness of the story and fails to deliver what was expected.

Romance is a tradition with Yash Raj Studio

This entry was posted on Monday, January 16th, 2012 at 11:44 pm and is filed under Romance around the World, Romantic Movie Reviews. You can follow any responses to this entry through the RSS 2.0 feed. You can leave a response, or trackback from your own site.