Debue director Karan Johar has made musical love triangles to start his Bollywood career. Gripping on-screen story makes the audience smile, dance, cry and fall in love all in the same movie. Kuch Kuch Hota Hai was a super hit on the year that it was launched and bagged many movie awards. 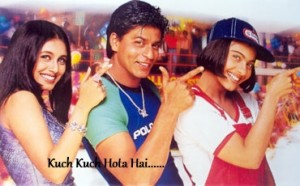 The story starts with the college days where Shah Rukh Khan as Rahul, Kajol as Anjali and Rani Mukherjee as Tina. Kajol and Shah Rukh Khan are always fighting with each other, play pranks but they are always best of friends. Kajol is a tom-boy and unlike other girls does not do any makeup and dress or the latest fashion to attract boys. Shar Rukh Khan is always behind girls and looking for a sweet heart. In comes the Rani Mukherjee as sweet, gorgeous and up to date with fashion and becomes Shah Rukh Khan’s friend. However, Anjali is in love with Rahul and want to tell his feeling. Jealous of Tina, Kajol also wants to dress like her to impress Rahul but hiding her feeling from him.
Finally Rahul tells his feeling to Tina and unable to bear this heart break Kajol goes ways from their life and does not contact either of them. Tina gives birth to a sweet baby girl but unfortunately dies during labor. Now Rahul is alone again with only his daughter.
There is portion of the story where Tina left a diary for her daughter about what happened in the college and how much Kajol used to love Rahul which Rahul was not aware of. This left a lot of question in that Tina was aware about her imminent death. Any way these is the part of Indian cinema where you are not supposed to think too hard but follow your heart rather than you brain.

Then start the series on how Rahul’s daughter turns the situation and makes arrangement so that both Kajol and Rahul can rediscover their love. But now Kajol is engaged with Salman Khan and is soon to be married. This is the time of high drama and emotional scenes.

Kukh Kukh Hota Hai did turn to be the mile stone for the debue director Karan Johar. KKHH has a great music score of 90’s with Jatin-Lalit with some unforgettable lyrics and songs. Lyricist Sameer wrote the romantics songs to add much charm this story. Yash Raj banner also showed faith in Karan Johar and he did not disappoint them. Shah Rukh Khan, Kajol, Rani Kukherjee and Salman Khan all looked good and gave some of their best performances.

I give 9 out of 10 to Kukh Kukh Hota Hai for portraying brilliant on screen romance and heart touching emotional scenes.

This entry was posted on Sunday, November 20th, 2011 at 2:21 am and is filed under Romance around the World, Romantic Movie Reviews. You can follow any responses to this entry through the RSS 2.0 feed. You can leave a response, or trackback from your own site.