Nothing Much to Offer in Modern Version of Devdas - Dev D

Snapshot of the story
Dev D is the modern version of Devdas written by Saratchandra Chattopadhyay, but the characters and situations are quite similar to the original Devdas screenplay. Dev loves his childhood friend Paro. But due to some suspicion on the character of Paro, Dev insults her and as a result Paro unable to bear the insult gets married to some other person. Now, heartbroken Dev becomes addicted to alcohol and drugs. One day he visits the prostitute named Chanda and then he falls for her. Climax of the movie was made different (intentionally) from the original Devdas. 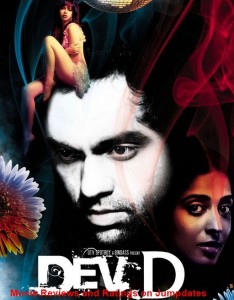 Dev (played by Abhay Deol) is a son of rich Punjabi businessman. He and Paro are childhood sweethearts. Later on when both of them grow up, Dev goes to London for his higher studies. But distance increases the love between them and their love blossoms. They try to be near to each other with the help of communication such as letter, e-mails, telephones, etc.

Dev returns to Chandigarh to meet Paro. Both of them express their love for each other with some dark romantic scenes. Dev comes to know that Paro has an affair with another person that turns out to be just a rumor, hurtful Paro gets married to someone else decided by her parents. Tormented by Paro’s wedding, Dev has started seeking solace in alcohol and drugs and becomes the regular visitor to hookup at Chanda’s place. Chanda has been disowned by her family after her port MMS hit the internet. Dev finds solace with Chanda and she also starts loving him, but due to her profession gets rejected by Dev. But after spending few months lonely he realizes that he loves Chanda and they both start living together.

Dev D is a modern version of Devdas the change in the story was expected, but there was not much change is the actual storyline and anyone who watched the old version would definitely get bored. There was only a change in the climax. Director Anurag Kashyap tried to make something different, but ended up doing something that was not appreciated by audience or critics. Music of the movie is also good and but never the talk of the town. Abhay Deol did a good job as Dev but that was not good enough to make it a hit.

Rating
Dev D scores 5 out of 10, it is very sad to see the good story is wasted like this. Having originated from the original Devdas movie, the romanticism of this version is let down on the big screen.

This entry was posted on Thursday, December 29th, 2011 at 10:09 pm and is filed under Romance around the World, Romantic Movie Reviews. You can follow any responses to this entry through the RSS 2.0 feed. You can leave a response, or trackback from your own site.