This is the story on unemployed young guys Prem (Ranbir Kapoor) who finally decide to run his fathers restaurants after trying his luck to find a job. Prem along with her friend help lovers to get married in case their parents are against them. Jenny (played by Katrina Kaif) mistakenly kidnapped by them and then start the love and affection fairly one sided by Prem as Jenny loves his childhood friend Rahul (Played by Upen Patel). 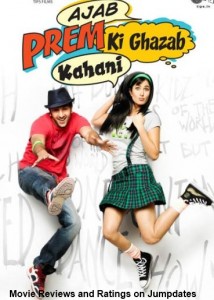 Storyline
Prem (Ranbir Kapoor) is in the role of boy next door and looking for good job after graduation. After trying hard he joins his father’s restaurant. Prem and his friends help lovers by helping them getting married if their parents do not agree, they call it as social work.

One day they by mistake pickup Jenny (played by Katrina Kaif) in their mission. Jenny lives with her foster parents who are indifferent and uncaring. When Prem saw Jenny he falls in love with her and tries to impress her but fate has decided something else for him & he comes to know that Jenny loved another guy – Rahul (Upen Patel) who is a son of conniving politician. When Jenny tells Prem that the father of the guy is not ready for their marriage, Prem had a plan with his friends to flee away rahul and make arrangement for their wedding. Thye have to make another plan to flee away with Jenny also as her parents decided to she will marry with rich guy.

This plot of the movie is weak and does now convince audience but with charm of Katrina Kaif and boy next door image helped movie to do well in cinemas. Romantic scenes in the movie are good and it is the first time Katrina and Ranbir worked together, both looked good onscreen. Ajab Prem Ki Gajab kahani has lot of funny moments in the movie which makes audience glued to their seat.

Both Ranbir and Jenny look best in their role, all credit goes to Rajkumar Santoshi. Rajkumar Santoshi is the stable director in the Bollywood and has made movie of all genre like Romance, Musical, Drama, and Comedy. “Andaz Apna Apna” was his first hit comedy movie. Music of “Ajab Pre Ki Gajab Kahani” composed by Pritam who did fair job by giving it vibrant touch. Screenplay of the movie which made it looks good in spite of weak story line.

“Ajab Pre Ki Gajab Kahani” scores 5 out of but I would like to add 1 more start for only because of the char that Katrina brings on the movie.

This entry was posted on Monday, December 19th, 2011 at 10:44 am and is filed under Romance around the World, Romantic Movie Reviews. You can follow any responses to this entry through the RSS 2.0 feed. You can leave a response, or trackback from your own site.