The Must Watch Movie of Ranbir Kapoor - Rockstar

Yet another love story from Imtiaz Ali camp but bit different from his earlier romantic story like Jab We Met and Love Aaj Kal. The movie is about a Delhi based college student Janardan Jakhar aka Jordan who dreams of becoming a “Rockstar” someday. He gets suggestion from his friend that true music can evolve only from the broken heart, and he tries to get his heart broken from a girl Heer who has done this many time with other guys. But as fate has decided something else they fall for each other and then separate because their ways were different. Rest of story shows us the music evolving from the broken heart and how deep was the love between Jordan and Heer. 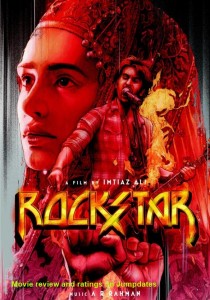 Story of the movie starts with a nerdy college student from Delhi Janardan aka Jordan (played by Ranbir Kapoor), who has fond of music and dreams to become a Rockstar someday. Once while sitting with his best friend he is told that “tute hue dil ses hi sangeet nikalta hai” means true music evolves only from the broken heart. Now Jordan tries to get his heart broken from a girl named Heer who is famous for ditching guys.

On meeting Heer first he gets insulted by her but later on both of them gets befriended and slowly starts loving each other. But as their ways were different they have to get separated. Heer gets married in Prague and Jordan becomes a Rockstar (as his heart is now actually broken). Then there are few superb songs from A R Rahman and beautiful camerawork by Anil Mehta.

Now the story gets a turn when Jordan gets a chance to go for a music concert at Prague. There he starts searching Heer and finally meets her. Confronting each other both Heer and Jordan feels refreshed and becomes exciting. There are few romantic scenes that show the love between both of them still alive even after so many years.

Rockstar is emotional love story where Janardan Jakhad becomes Jordan. Ranbir Kapoor acting was awesome in the movie. Nargis Fakhri is impressive in her debut movie more with her beauty. Music composed by Oscar award winner A.R. Rahman and songs sung by ace singer Mohit Chauhan create the magic as they made the chart topper songs. Rockstar certainly established Ranbir Kapoor in the industry and gave Nargis Fakhri the perfect start needed.

Rockstar scored 7 out of 10 with rocking performance from Ranbir Kapoor. Director Imtiaz Ali has proved him as versatile director but he still need to come out of his emotional love story theme. Even though Rockstar failed to bring expected audience but it silence all his critics.

This entry was posted on Saturday, December 24th, 2011 at 4:11 am and is filed under Romance around the World, Romantic Movie Reviews. You can follow any responses to this entry through the RSS 2.0 feed. You can leave a response, or trackback from your own site.