The movie is about a Squadron Leader Veer Pratap Singh (SRK) and a Pakistani girl (Preity Zinta) who is daughter of a strong Politician Jahangir Hayat Khan (Boman Irani), about their love. Veer-Zaara is about the man who can sacrifice his whole life just for his love to be happy. The story also gives a message to strengthen a bond of love between the two neighborhoods countries India and Pakistan. 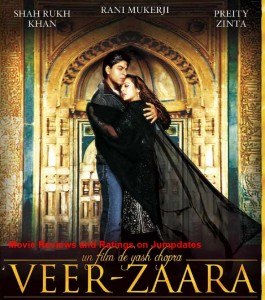 Veer-Zaara is an emotional love story that goes back in time also shows how true loves goes to trauma as they are not same religion and from rival countries. Zaara come to India from Pakistan for final rituals of her surrogate mother and met with an accident. Veer is part of rescue team save her life and also help her in rituals, both becomes good friend. Veer takes Zaara to his uncle’s place where Zaara shows interest in starting a school for girls. Impressed by her thought both uncle Choudhary Sumer Pratap Singh (Amitabh Bachchan) and aunt (Hema Malini) motivates him to propose her marriage. Before Veer could get chance to express his feelings he comes to know about Razaa that came to receive her on railway station.

Razaa ( Manoj Bajpai) is one who is going to marry Zaara, a decision takes by Zaara’s father to take the political mileage in Pakistan. Veer come to know that Zaara has feelings for him, he decide to go Pakistan to express his feelings. After reaching Pakistan Veer come to know that Zaara is getting married and now nothing much he can do in it. While returning back to her way to India Veer gets arrested and was put behind the bars slashing charges of Indian spy by Razaa. The bus on which Veer suppose to traveling met with an accident and every one think that Veer dead.

This entire plot get reveled by a human right activist Samiya Siddiqi (playes by Rani Mukherjee) who take his case to give him justice. After a trial court gives him clean chit, after 22 long years he sees Zaara. This part of the movie has touchy scenes and the king or romance Yash Chopra used all his experience looks very real onscreen.

Veer-Zaara is an emotional love story made by Yash Chopra who has been making love stories like Kabhi-Kabhi and SilSila was the bock buster in 70’s and 80’s. Shahrukh Khan gave his best performance and experimented by plying the role of Veer. Preity Zinta looked gorgeous. Good music that has become the hallmark of YashRaj Banner and with Veer-Zaara legendary music director Madan Mohan. Madan Mohan died in 1975 but his music was used in this movie which was remarkable achievement.

Veer-Zaara score 6 out of 10 for over all good performances by all and bags 1 extra star for Madan Mohan whose music was truly timeless, that make 7 out of 10. Veer-Zaara made good box office collections.

This entry was posted on Thursday, December 8th, 2011 at 2:11 am and is filed under Romance around the World, Romantic Movie Reviews. You can follow any responses to this entry through the RSS 2.0 feed. You can leave a response, or trackback from your own site.