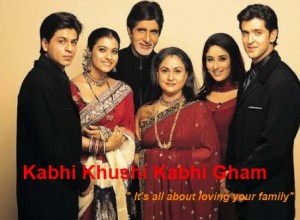 Like the other movies of Karan Johar this is also big budget, huge start cast, full of drama, family emotions and romance. K3G is story of young man Rahul (Shah Rukh Khan) comes from a rich family and some of well know industrialist. Shah Rukh Khan falls in love with Anjali (Kajol), obviously from a Indian middle class family and want to marry her but Mr. Raichand (Amitabh Bachchan) want Shah Rukh Khan to get married to Naina (Rani Mukherjee). She is family friend and daughter of well know and very close friend.

Kabhi Kushi Kabhi Gham is family drama; Rahul is adopted child to Mr. and Mrs. Raichand (Amithabh and Jaya Bachchan). Shah Rukh Khan likes Kajol and wants to marry her but Amitabh Bachchan is not happy with this relationship. After the death of Kajol’s father SRK gets married to her. Amitabh Bachchan takes the harsh decision and asks SRK to move out of the house and never come back.
Hrithik Roshan (Played as Roshan) was in the in boarding school when this happened and did not aware about the story. As Hrithik Roshan comes back from hostel he decides that he will go and take his brother back to where he belongs. Hrithik makes all sort of moves and ultimately manages to bring SRK to back home.

Amitabh Bachchan was phenomenon is his role as Mr. Raichand, SRK and Kajol look stunning his as even. Hrithik and Kareena were looked well in their first onscreen presence together. Romantic scenes were the highlights of SRK - Kajol and Hrithik and Kareena Kapoor sizzle on the screen. Music is the highlight and has romantic tunes of Jatin – Lalit which still remembered by millions of audience. Movie comes with the tag line “it’s all about loving you parents”

Rating
Movie scores 8 out of 10 for good music, strong performance all the actors and good music, however movie has lots of emotional scenes and places where completely do not connect with audience.

This entry was posted on Monday, November 14th, 2011 at 7:12 am and is filed under Romance around the World, Romantic Movie Reviews. You can follow any responses to this entry through the RSS 2.0 feed. You can leave a response, or trackback from your own site.