Kurbaan is story of a terrorist group that plays the bloody game of extreme terrorism in the USA. Story seems to be inspired from post-9/11 attack on twin towers. Saif Ali Khan is a wanted terrorist and part of a terrorist group planning a series of attacks. A love story runs alongside with this intense and sensitive issue and has been beautifully directed. Music director Salim Sulaiman gave Sufiyana (traditional music from the middle east) music to the movie that was praised by all the critics and loved by the audience. 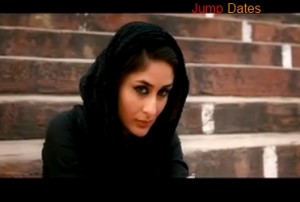 Movie reviews and rating of Kurbaan

Avantika (played by Kareena Kapoor) works in USA as a lecturer, but looses her job. She comes back to Delhi and starts working as a lecturer in a local college, there she meets Ehsaan (played by Saif Ali Khan) and as fellow lecturer both get attracted towards each other and love blossoms between them. Now Avantika gets a call from the same College to rejoin and both fly to USA.

Just when you think that everything was going rosy as romance of Avantika and Ehsaan is at it’s peak the story takes an unpredictable turn. Avantika comes to know that the bomb blast that took place in the New York subway was planned and executed by Ehsaan and his group. Avantika is shocked and is in a disarray knowing the fact that her husband is a terrorist on the other hand Ehsaan and his group are planning for another bomb in an aeroplane. Avanrika seeks help of Riyaaz (Vivek Oberoi) and infiltrates the gang to break off this deadly plan.

At times as an audience you will be wondering and can’t decide whether it addresses the issue of terrorism or showing terrorism for commercial benefits. There are many flaws in the movie, e.g. we all know that America become a different country post-9/11 when it comes to security and on other side you see Ehsaan a wanted terrorist roaming freely on the streets of New York which is hard to believe. With all these hiccups Kurbaan is an engaging story that works well and give you a lot of nail biting moments.

Director Rensil D’silva made a confident start to Indian cinema with great camera work of Hemant Chaturvedi and great music of duo Salim-Sulaiman that sounded flawless. The onscreen chemistry of Kareena Kapoor and Saif Ali Khan was fantastic as they share the great off screen bonding in actual life. The veteran actor Om Puri in the role of Khalu Jaan looked like a perfect cast.

Kurbaan scores 7 out 10 for handling the burning issue of terrorism so gracefully. Director Rensil D’silva made an impressive start in Bollywood.

Posted in Indian Movie Reviews, Romance around the World | 3 Comments »

Young Love Story of Kareena and Shahid - Jab We Met

Snapshot of the story
“Same recipe with new cover on it” but it tastes a bit different from others and is good. Director Imtiaz Ali is not afraid of experiment and touched new heights in direction with “Jab We Met”. The story revolves around the two persons who are in love with some other person but as the fate has something else in their lives they meet each other. As they start spending time together they fall in love with each other. Story is perfectly handled with perfection by Imtiaz Ali which makes it look sweet and peppy love story. 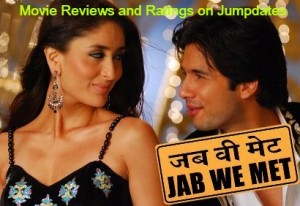 Review of Jab We Met

Storyline
Aditya (played by Shahid Kapoor) is an industrialist and in love with a girl, but unfortunately the girl gets married to another person and the heartbroken Aditya being unable to muster up the courage to return home aimlessly boards the train bounding away into night.

On the other hand, a beautiful and annoyingly talkative girl Geet (played by Kareena Kapoor) leaves Mumbai to return her hometown Bhatinda. Co-incidentally both of them cross one another’s path by boarding the same train. Geet with her talkative nature irritates Aditya to the point of getting him to leave the train. Another misfortune happens there and both of them find themselves stranded on a desolate station with no luggage or money. Then both of them travel through bus, taxies and even in bullock cart to reach Bhatinda. Ths part of the movie is full of fun and confusion as Geet’s family think that Aditya is the boy friend. Soon both go back to their normal life ending it no high note. Both Aditya and Geet after an month with different situation in life and has feeling for each other but now both has confused feeling where they like each other or not and this keeps momentum of the story. First half of the movie is filled with fun, humor and charismatic presence of Kareena.

“Jab We Met” is peppy love story and Imtiaz Ali has made it look fresh. Story gives you plenty of reasons to laugh and one can take get lost in sweet screen romance of Kareena and Shahid. This is the story when Shahid and Kareena were having and affair which helped them portraying romantic scenes with ease.

First half of the movie is the best part of the movie and makes the audiences glued to their seat. Fresh story, good screenplay, charisma of Kareena Kapoor and impressive Sahid Kapur made it hit and Music by Pritam was icing on the cake. Pritam has did a successfully experiment with music as the fusion of Indian and western and made popular within young crowd. All in all a good entertaining movie with few hick up there and there this can easily be ignored.

“Jab We Met” scores 8 out of 10 for good music, mature performance, good all round performance in music helped in wining National Award for “Yeh Ishq Hai”. Movie did good office collection of $30 million.

The story is about three Engineering students Farhan (R. Madhavan), Raju (Sharman Joshi) and Rancho (Aamir Khan) who become friends and shares a room in the school hostel. Story is a roller coaster ride of these three friends’ and how their friendship is tested by time and how they overcome these tests. Story of 3 Idiots is inspired from the book by a well know novelist Chetan Bhagat. 3 Idiot highlight India’s materialistic education system that motivates students to run for grades to get good job in western countries rather than study for knowledge. It provides a good punch line “Study for knowledge and not for grades and excellence will follow you”. The movie has lots of humor and is the ranked as one the best comedy movies ever made.

Movie starts with high drama as Farhan and Raju gets a call from Chatur (One of the college friend) about Rancho whom they have not met after the convocation day in college. Chatur is the one who forced Racho for a bet to see who will be successful 5 years down the line after graduation and to tell him that he would end up in a multi-million dollar contract from a scientist that has more than 500 patents; in short to tell him he is more successful. In this search they look across the beautiful valleys on Shimla and the story runs in flashback about their college life, tussle with college principle and how Rancho tries to challenge the current education system and rules of principle. In all this he always beat others who study only for grades. On the other hand both Raju and Farhan always ranked in last position, as Raju is always afraid of failure. Farhan desparately wanted to be a wild life photographer but was forced by his parents to be an engineer. Rancho used to keep telling them that they become what they liked rather than what others want them to be. In pursuit of Rancho in valley they met Pia who is getting married but still has feeling for Rancho. Pia decides not to marry and go in search for Rancho.

Twist in the Tale

Rancho and Pia (daughter of principle) falls in love during the college days but never share their feeling for each other and one day Rancho decides that he will go to the principle’s house that night to tell his feeling and in this he accompanies both his friends Raju and Farhan. All of them do all mischievous activities in the principles house and is spotted by the principle.
The story takes the tragic turn as Raju attempt suicide when the principle asks him to become eye witness against their late night mischievous act in the house and to punish Rancho and expel Farhan. However this step afterwards is overruled.

Every character in 3 Idiots was played with superb acting. The first time appearance of Aamir Khan and Karina Kapoor in the lead pair was very much appreciated by fans and critics. The principle, Viru Sahastrabudhhe played by Boman Irani was truly out standing and any one could relate their college principle with him. Music is the life line of the Indian movies and 3 Idiots also score for its music by Shantanu Moitra and sung by Sonu Nigan, Shaan and Shreya Ghoshal.

The story take lots of turns before they finally meet Rancho who is the same scientist whom Chatur was looking to meet for multi million dollar deal and wins the bet of being more successful. Story ends on a happy note as Rancho and Pia ties the knot, Raju gets a job in a big company and also manages to help his family financially. Farhan was now a famous wild life photographer. Story gives a social message that “Study for knowledge and not for grades, excellence will follow you” and “Do what you like rather what others want you to do”.