Kim Kardashian is again in the news after she ended her 10 week old commitment with Kris Humphries, which was an expensive affair for the media as it cost them millions of dollars to publish in the news. Kim Kardashian was spotted with her ex-boyfriend Reggi Bush one day before Valentine’s Day having an expensive dinner together reported by TMZ.

Reggi Bush, yes you got it right he is the ex-boyfriend of Kim Kardashian. They ended their two year old dating saga in 2009 putting a full stop to all their rumors about their commitment. But now what are they are doing together? TMZ has asked about Reggi Bush to Kim on this hot topic and got a response “Hell No!”. “I don’t want another footballer in my life”, says Kim.
Both Reggi Bush and Kris Humphries were 1980’s born and five years younger than Kim Kardashian and that as why they don’t want to start this all over again. 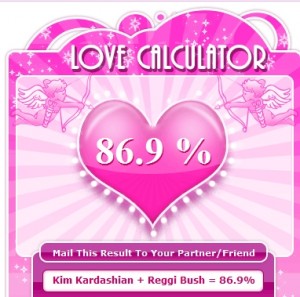 At Jumpdates we did their match-making by using ancient Chinese astrology and here are a few facts about this..

These Astro match making results show that they have all the possibilities to make a great couple. But it is up to the individuals what they think about their relationship, there could also be the factor of age as Kim wants an older guy who can shoulder more responsibility and Reggi ideally wants a younger babe.

Time will tell how this couple will do in their relationship but with the spotlight of the media and their not so private relationship it is going to be a challenge for them both.