The story is about a guy named Raja (Aamir Khan), who enjoys spending his father’s money engaging in wild parties and on a girl named Madhu (Madhuri Dixit) who is arrogant and irresponsible. Both of them meet each other in college and due to their big egos they do not see eye to eye and subsequently don’t like each other’s company. One the other side their parents think otherwise and want both of them to get hooked up and married. As a result of this, they look for every opportunity or excuse to avoid this from happening. Madhu gets and idea in trying to frame Raja from attempting to rape her. Unexpected for Madhu, Raja wants Madhu to forgive him even if he though he had nothing to do with this and this makes Madhu fall in love with Raja. 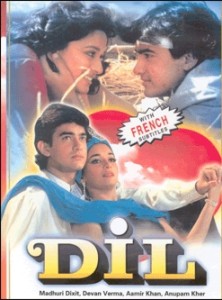 Movie Reviews and Ratings of Dil

Debutant director Indra Kumar made the mark with a big bang by creating an emotional love story and music by legendary Anand-Milind and produced a hit that is quite an achievement.

Dil is story of young couple whose parent want them to get married, but they oppose their decision and when they fall in love their parents come into their way. Raja (played by Aamir Khan) is a son of a businessman named Hazari Prasad (played by Anupam Kher).
Raja believes in luxurious life and spends his father money for his selfish interest. He doesn’t want to take on responsibilities and just keeps on wandering through life like a loafer. His father wants him to marry a rich girl and to get huge dowry.

On the other hand Madhu is a rich, arrogant, irresponsible girl who donesn’t care about others feeling and does what she wants in life. Madhu and Raja studies in the same college and both of them want to have the upper hand and want to be the talk of the college. Both Raja and Madhu do not like each other at all and play pranks with each other. But destiny has decided something else for them and their parents become good friend and want that this friendship turn into more than a platonic relationship.

Not happy with this Raja and Madhu searches for a way out of this and Madhu creates a plot and falsely accuse Raja in an attempt of raping her while on a college tour. Raja gets insulted in front of all his colleagues and friends. Shocked by these charges Raja wants to teach her a lesson and contemplates actually raping Madhu and teach her a lesson, but his ethics do not allow him to go this far. Madhu who until now felt that Raja is not a good guy suddenly falls in love with him. Kissing scene between Madhuri Dixit and Aamir Khan made lots of controversies during that time. Without their parents permission they marry each other, but their parent’s keep on playing dirty tricks with them. This is fascinating to watch on how they fight against all odds and come out of this situation.

Onscreen chemistry of Aamir Khan and Madhuri Dixit was very good and their college scenes and tussle between their groups were the highlight of the movie. Director Indra Kumar made a movie on a very usual subject, but his direction has put freshness in the story. Music of the movie was a class apart and a chart topper for many months. Anupam Kher and Saeed Jaffery was outstanding in their supporting role.

Dil scores 8 out of 10 points for the outstanding performance of actors, awesome music and very good screenplay and we give full credit for debutant director Indra Kumar who went on to make successful movies in the following year including Ishq and Mann that also did very well in box office.