Two champions of their times, Steffi started her professional career early at the age of only five (in 1982) whereas Andre Agassi became pro in 1986. Both tasted success and fame and became stars in both on and off court of tennis. 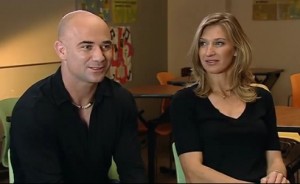 They first met in 1999 started dating as this was the time when Andre Agassi ended his two-year old relationship with celebrity Brooke Shields. Ace tennis star Steffi Graf was also single quitting her long term relationship with Germen Formula One driver Michael Bartels. This was the same year when both won their singles Wimbledon title on the famed center court and fate would deal a hand. With love in the air they moved to a new house in Las Vegas. Their love was clearly visible every time they come out to the courts and Steffi was in her last Wimbledon in June 1999. The golden ring is her finger signifying every chapter in their romance.

On October 22, 2001 they tied the knot with only their mothers watching as they exchanged wedding vows with a kiss. Agaasi’s father quoted “There is no hard feeling amongst the uninvited”, “When I got married, he didn’t know about it”. “We are blessed to be starting this new chapter in our life” said the newlywed couple, expecting their first baby. Jarden Gil was born just four days later after their wedding and their daughter Jaz Elle was born in October 2003.

Early parenthood in their married life played the vital role in make their relationship a success as even after 10 years of married life they are still going strong. The duo takes every precaution not to reveal any secrets from their personal life which is very much noticeable in his autobiography “Open”. Andre Agaasi did not talk much about his personal like or share it for that matter. He was just as cool on-court as he was off-court.

Both of them are enjoying their lives in Las Vegas and setting a perfect example for other celebrity couples in Hollywood where the divorce rate is frustratingly high. Jumpdates wishes them a happy life ahead and keep scoring ace’s in their committed relationship to each other as they have shown throughout their professional career.

This entry was posted on Wednesday, February 15th, 2012 at 11:10 pm and is filed under Celebrity Dating Stories, Successful Love Stories. You can follow any responses to this entry through the RSS 2.0 feed. You can leave a response, or trackback from your own site.