Zoosk.com - A dating site that was making headline news at one time

Where is zoosk.com now?

A little more than 4 years ago Zoosk.com was making headline news all over the internet and even on TV, but recently, the name doesn’t ring a bell as much as it did before. Some of our readers have reported that the site is full of spammers and is not what it was made out to be. It would be great to get some more feedback from our readers on this once wondrous online dating site that has been making waves and becoming a rising star.

We here at Jumpdates did do a complete review of this dating site and you can read it here..

One of the ways to find out about a dating site is to simply type the site into the Google search box. I did a search for ‘Zoosk.com reviews’ and came back with the first site called ’sitejabber.com’. Funnily enough this site gave a rating of 2.8 out of 5.0 for the zoosk.com site as did we, which may tell us something about the quality of ratings, but you can decide. I did read some of the top comments and some were not very good as they refer to the site as scammers and have been setup to extract money. Although one should take all the comments with a pinch of salt, there is no denying that website has been losing significant traffic over time as the diagram shows below (taken from a reputable web analytics site - compete.com). 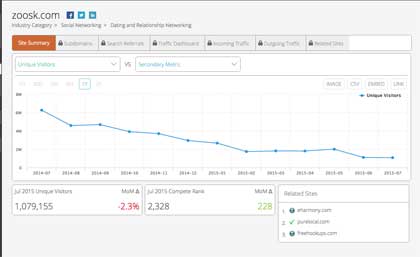 All time traffic to Zoosk.com does appear very dismal and could be an indication that the site is not as rosy as it was then. For my 2 cents, it could be another internet star that is biting the dust, keep in mind that we always hear of high fliers but little news given to struggling and potential upcoming stars. I guess we all like to be optimistic about the future which makes us more impetuous to try harder, but one should always be presented with a balanced picture so that there is semblance to the many who try and fail and to the very few that do succeed.

This entry was posted on Monday, August 31st, 2015 at 1:55 pm and is filed under JumpTrends, Online Dating Sites Reviews. You can follow any responses to this entry through the RSS 2.0 feed. You can leave a response, or trackback from your own site.